How do you know when it’s time for an engine rebuild? 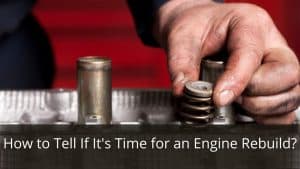 What are the signs that your engine needs a rebuild?

If you’re driving and your engine starts to make a clanking, banging or slapping sound; if it’s hard to start in the morning even after repeated attempts, but seems fine once it’s warmed up; if the engine is smoking or leaking fluid and there are puddles near your vehicle, then it’s most likely time for an engine rebuild. For a more detailed look at what’s going on, take your vehicle to a mechanic for an inspection.

Is it worth rebuilding your engine?

It is important to note that there are many factors involved with deciding whether to rebuild or replace an engine. The cost of the engine itself is a big factor, but so are the condition and mileage of your car.

In order to determine if it is time for an engine rebuild, you need to consider the following factors:

The Cost of a New Engine

If your engine is old and has high mileage, it will be more expensive to buy a new one than if you were just looking for a used engine.

The Condition of the Car

If your car is in good condition, it might be worth fixing and keeping around. If you are looking to trade in your old car for a newer model, however, you will probably have to replace the old engine.

The Cost of a New or Used Engine

If your car is in good condition and you can find an affordable used engine, it might be a better option to buy a new engine.

What are the benefits of rebuilding your engine?

The benefits of rebuilding an engine are that it can make the vehicle run smoother, quieter and more efficient. A rebuilt engine is also less expensive than a new one. If you’re wondering if it’s time to rebuild your engine, you can take a look at the following signs:

-Your car is making more noise than usual.

-The oil pressure light and temperature gauge are on.

-You hear gurgling or knocking sounds in the engine area.

-The car is not accelerating properly and has difficulty climbing hills.

If you have any of these symptoms, it may be time to rebuild the engine.

What are the risks of rebuilding your engine?

If you have any of the following symptoms, it may be time to rebuild your engine:

– Blowing smoke from the exhaust.

What is the process of rebuilding an engine?

Can you prevent needing an engine rebuild?

An engine rebuild is necessary when the engine becomes worn out, and has reached a point where it can no longer be repaired. Preventing an engine rebuild can be done by staying on top of maintenance, and having the engine checked out at regular intervals.